How is PropTech transforming careers in property?

Last week, I was privileged to be asked to appear on a panel at an event hosted by Cripps Pemberton Greenish and organised by the YEP (Young Entrepreneurs in Property) titled ‘How is PropTech transforming careers in property?’ alongside Gonzalo Marquesini, founder of RenKap and Andrew Knight, International Data Standards Director at RICS.  The discussion was interesting and wide-ranging, but I've captured some of the key points that came up in the conversation below.

'PropTech' is a somewhat fuzzily defined term but, essentially, it refers to technology used within the real-estate industry.  This is very wide-ranging, covering everything from software used at the earliest stages of site viability and design (such as SiteSolve), to hardware embedded within built assets themselves.  It covers technology used by many different kinds of built environment professionals, including developers, engineers, surveyors, architects, lawyers, land agents and more!

As it's so broad, it's really more of a marketing buzzword than it is a useful technical term, but it has acted as a catalyst to draw more attention to this previously neglected area of technology and to bring together members of these different professions, to start taking a more connected approach to the problems of the industry.

What skills does the industry need to make better use of PropTech?

Whenever I talk about the distribution of skills the industry needs to digitalise, I typically describe it as a pyramid.  At the base we have 'traditional' property professionals, who need all (or at least, most) of their current skills, plus some additional knowledge about how to feed into and interact with technological processes, but who don't necessarily need to be hands-on with it.  At the top of the pyramid we have the real technology specialists who are researching and creating new forms and uses of technology and managing its implementation.  In between those two, we have the most important layer - the hybrids.  These are people who are working as property professionals but are doing so by utilising new techniques and technologies.  They not only act to realise the value of the technology in practice but also act as a two-way conduit between the base and the tip, feeding business pains and gains up to the tech specialists, and spreading the latest innovations to inform and integrate the work of the rest of their colleagues. 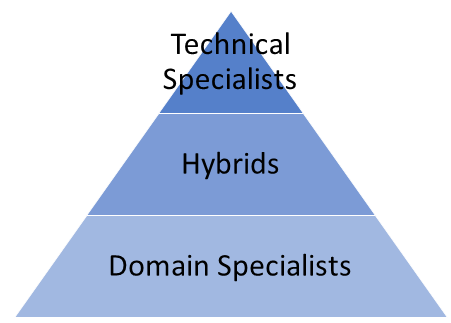 This is the most important layer (in terms of driving digitalisation) and it’s also the one, currently, with the greatest skills gap; there is a severe shortage of people able to fill this role of 'translator' between the theory and the practice and the pyramid currently looks more like an inverted ‘T’!  The industry, therefore, needs to invest heavily in developing and recruiting these people and, I suspect, these will be the skills in highest demand in the near future.

Why has digitalisation of the real-estate sector been so slow compared to other industries?

There are several reasons.  For many years, property and construction companies have largely taken an 'if it ain't broke don't fix it' approach to innovation and a lack of meaningful alternatives and ever-growing demand has meant that this has allowed people to keep on making money, relying only on traditional techniques.  However, this is changing; we are now starting to see a number of big tech companies take an active interest in the sector with the aim of disrupting it, as they have done within many other industries.  The incumbents are starting to realise that if they don't learn quickly how to do what the tech companies do, then the tech companies will learn how to do what they do!

It isn't all a question of attitude, however; there are practical barriers as well.  Construction and adjacent industries tend to be relatively low-margin activities, meaning that there's not a lot of money available to re-invest in innovation.  The fact that every building project is unique, means that it is difficult (although not impossible) to carry forward innovations that worked on one project and re-apply them to another.  This means that innovation can seem to be going in circles in the industry; whenever I go to a conference the “hot and sexy” bit of tech people are showing off is generally not all that advanced to the hot sexy bit of tech I saw at the same conferences a decade ago, it is just being done by different people on different projects.  This is changing, however, and there is a growing interest in not just playing with these bits of tech but in generalising and productising the technology originally developed to meet project-specific needs. (SiteSolve itself being a good example of this!)

What is the best way to get started in PropTech?

The universities and professional institutions are slowly catching on to the existence of PropTech and there are a number of promising initiatives being launched by these bodies.  For now, however, there is not much organised support for PropTech education and you'll need to be largely self-directed in learning about it.

The good news is that the best way to learn about technology is to use it!  This means that the first skill that is required is in being open to new technologies and finding good excuses to try them out.  This can sometimes be difficult to do on-the-job as project timescales and budgets can be too tight to allow much experimentation, and so you may need to be prepared to invest some of your own time into it.  That’s not ideal (and hopefully with time the industry will adapt to make more room for this necessary upskilling) but fortunately a lot of technology skills are highly transferable and practicing them doesn't have to feel like work if you can find projects you enjoy.  For example, I learned some of my coding skills at work, but the way I got good at coding was through playing around and making weird little videogames in my spare time.  That was fun (for me, at least) and the skills I learned doing that - efficient coding, 3D geometry, UX design, etc. - are all directly applicable to the work I'm doing now.

At first, don’t worry about ‘reinventing the wheel’ – even if you are only replicating things that other people have done before, you’ll still be learning an awful lot.  However, eventually you’ll want to start exploring the vast tracks of unexplored potential that exist in this field and the best advice I can offer on how to go about that is to start from a position of understanding your clients and their needs.  Then you can work towards implementing the cool technology that will really help move the industry forwards, rather than just cool technology for the sake of cool technology!

Of course, if you already have the skills, and are interested in a more direct route into PropTech, we are always looking for exceptional young talent to join us!